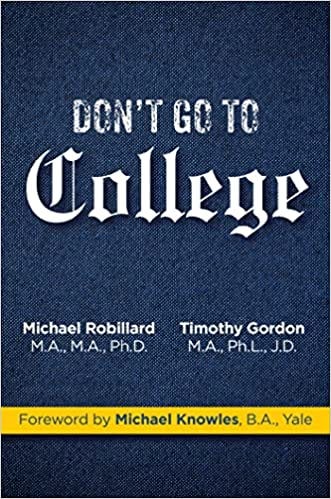 The book “Don’t Go to College: A Case for Revolution” should come with a trigger warning for those in higher education.

College students and their professors in ivory towers will find safe spaces and support animals useless when reading this book. A better safe space would be a nuclear fallout shelter because authors Michael J. Robillard and Timothy J. Gordon go nuclear on today’s mass indoctrination courses in higher education.

Robillard is an Iraq War veteran, independent scholar and philosopher, and Gordon is the author of numerous books and hosts the Rules for Retrogrades podcast.

The authors don’t mince words because they have experienced the rapid disintegration of higher education from inside the college bubble as both students and professors. Between them they hold six post-graduate degrees, and Gordon gained national notoriety in 2020 when he was canceled as theology chairman from a California Catholic high school for his opposition to Black Lives Matter. 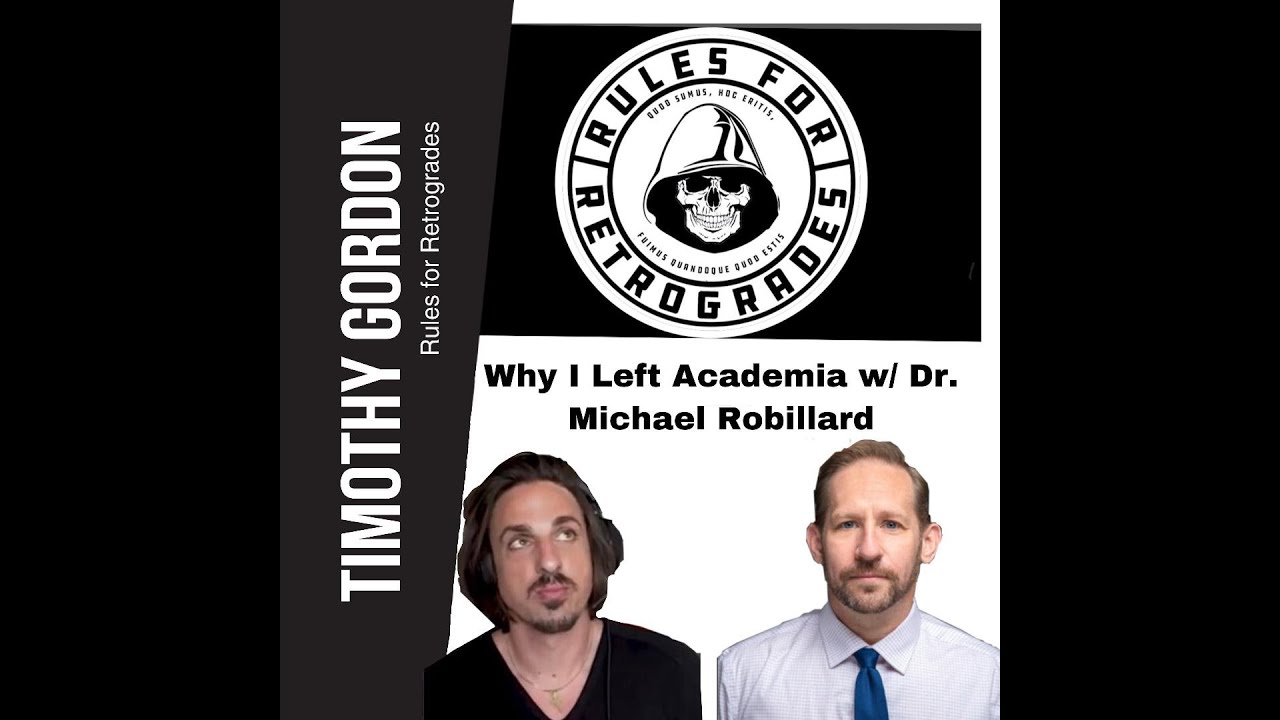 The premise of their book is simple: colleges and universities have become an inversion of their original purpose: rather than a whetstone to sharpen a student’s intellectual skills and hone critical thinking abilities, instead they are mass producing young adults who are infantilized, arrogant and bereft of marketable skills that enable success.

Or as the authors quote British journalist and Oxford graduate James Delingpole: “Universities are madrassas of woke stupidity.”

“The “+” sign is a conceptual placeholder for literally any and all future ‘marginalized’ groups imaginable, no matter how niche, bizarre, vicious, contradictory, illogical, incoherent or detrimental to individuals and civilizations as a whole. Indeed, the weirder and more niche, and therefore more marginalized, the better,” the authors write.

Whether describing the history-illiterate 1619 fallacy or legitimizing cross-dressing men who insist they can get pregnant, the authors summarize much of the woke thinking simply: “In other words, we’re supposed to deny reality and affirm someone else’s desire to live in a fantasy world.” 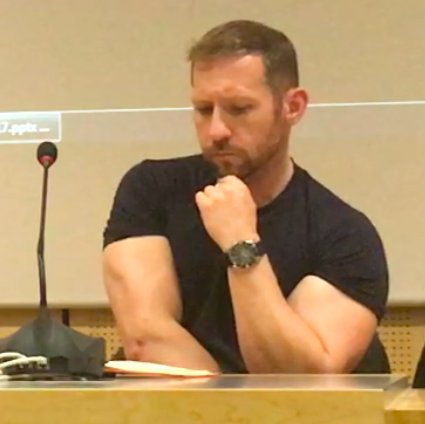 Aside from higher education’s emphasis on wokeism and the routine trashing of America, the authors also cite the ruinous debt students accumulate when pursuing a four-year degree, noting that in the last 20 years average college costs have more than doubled.

“Like drug dealers, college administrators want to get you hooked on the opiate of higher education so they can profit further,” the authors write in Chapter 3. “Given how many kids now go to college – and given how academically subpar college has become – an undergraduate degree is effectively the equivalent of your grandfather’s high school diploma.”

The book makes it clear that the scourge of liberal/progressive neo-Marxism infecting America’s campuses is not relegated to just liberal arts colleges and the social sciences, but even schools and curriculums focused on science and mathematics.

“The same neo-Marxists who corrupted the humanities are just as eager to corrupt the sciences. If they succeed in doing so, the results could be catastrophic,” the authors warn. “We’ve seen politicized science many times before – most notoriously in the great tyrannies of the twentieth century.” 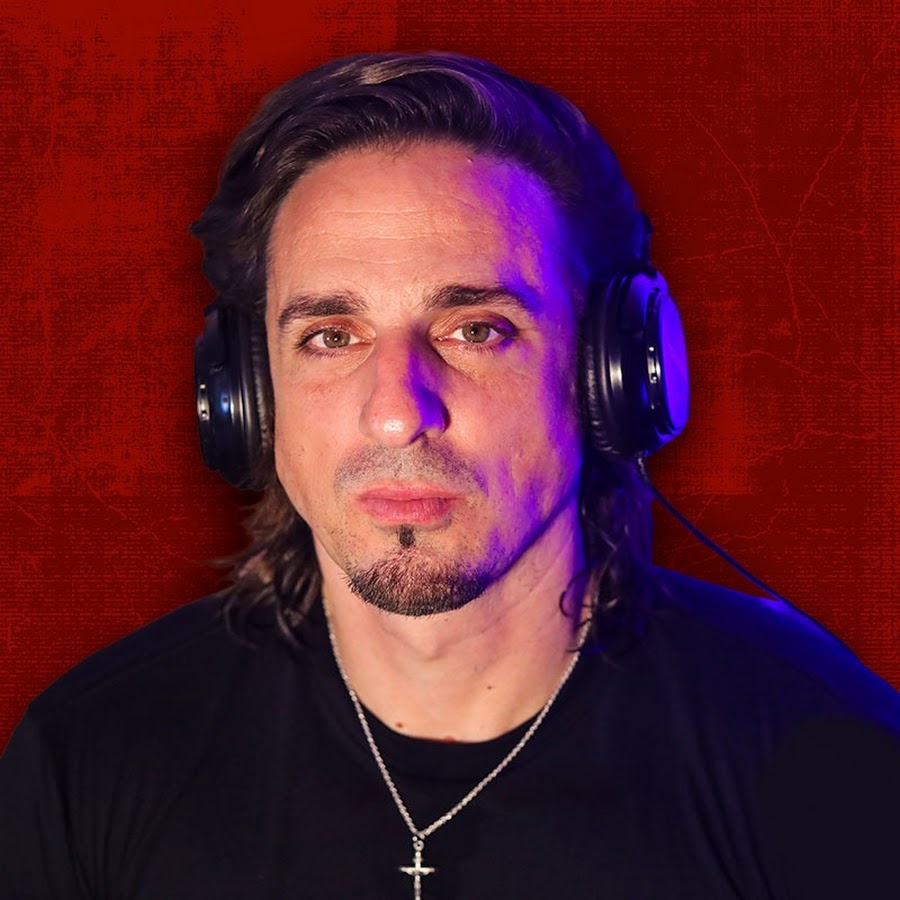 In Chapter 5 the authors expound on how universities are little more than adult day care centers and how they retard the maturation process in young adults.

“Moms and dads alike want their kids to ‘grow up’ and ‘gain experience,’ not realizing that the experience their kids will gain will not be morally formative and that they are actually discouraging their kids from growing up,” they bluntly state.

Aside from the cultural indoctrination and crippling debt a college degree entails, the authors also warn parents of a third red flag on the majority of college campuses: sexual degeneracy. Commenting on the frequent cases of students getting blackout drunk and engaging in transactional sex, the authors write:

“Our society as a whole seems unconcerned about how this might alter the moral outlook of generation after generation, not just in terms (at a minimum) of legitimized fornication, promiscuity, and sterility, but also in terms of normative sexual boundaries and definitions of deviancy (as with the LGBTQ+ movement, which is stronger on campus than anywhere else).”

In lieu of college, what the authors prescribe is learning a trade or pursuing a career that pays while you get on-the-job experience. So rather than racking up thousands of dollars in debt and being indoctrinated by professors who have never held a real job, you can educate yourself like George Washington and Benjamin Franklin did while earning a respectable living.

The book quotes renowned blue collar advocate Mike Rowe to support their thesis: “We’re lending money we don’t have to kids who can’t pay it back to train them for jobs that no longer exist. That’s nuts.”

The authors note that some careers like lawyers and doctors do require college, so in Chapter 6 they provide a list of “safer” schools for undergraduate studies.

For most students though, Robillard and Gordon suggest pursuing a self-education by narrowing down a subject specialty by reading “A Student’s Guide to” books in the Intercollegiate Studies Institute (ISI Books) series or Regnery’s Politically Incorrect Guide courses. Both of those series cover curriculum studies universities used to teach minus the leftist mumbo jumbo taught today.

Forty-nine pages of this profound book reproduce 19th century theologian John Henry Newman’s discourse on what a university should be and a sobering epilogue by Robillard on why he now disavows academia.

Informative, provocative and refreshingly candid, this perceptive book provides a cogent argument why society needs to rethink the necessity of a college education and pursue more practical alternatives that will help citizens and our country be the best we can be.