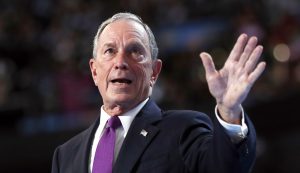 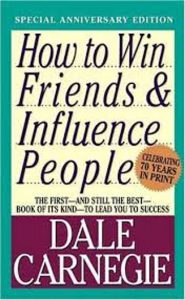 Beginning today the Trump Administration is offering unheard savings as evidenced by a reduction of the National Security Council staff by 50 percent.  You heard that right! All Obama-era holdovers must go and no bid is too low for a Never-Trump bureaucrat at this year’s Presidents’ Day Sale!

In a political consumer event almost too big to believe,  later that same day the U.S. Ambassador to the European Union, Gordon Sondland, was recalled from his overseas position. 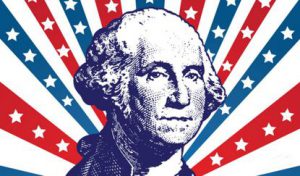 And that’s not all!  All bureaucrats bearing the Deep State label must go and no reasonable offer will be refused, says National Security Adviser Robert O’Brien.  O’Brien is promising more job cuts this week and the president has insisted that all Obama holdovers will be available on a first come, first subpoena-served basis.

If you’re in the market for an experienced backstabber, loquacious liar or illicit leaker, you must act fast to take advantage of this sensational Deep State Presidents’ Day Sale.

Hurry fast for best selection because President Trump has promised to make 2020 the biggest swamp draining event ever!  Once the rule of law is restored and these power-crazed Obama flunkies are gone, they’re gone for good!

For those who missed it, Nancy Pelosi put on quite a show at this year’s State of the Union address.

Demonstrating a wide range of expressions mirroring dissatisfaction, disbelief and disgust with President Trump’s speech, she pantomimed at least half of the behaviors identified by the American Psychiatric Association. 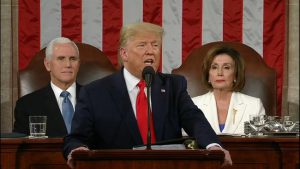 During one passage of his speech when the president outlined the danger of sanctuary cities to citizens, her body language and facial expressions exhibited equal combinations of Attention Deficit Disorder and drug addiction withdrawal.

Evidence and facts remain in short supply with efforts to prosecute this president, but his intent is always front and center with Democrats.  Below is what Dean Riff’s believes Nancy Pelosi was thinking during the speech before she literally “let it rip” afterwards.

TRUMP: “Three years ago, we launched the great American comeback. Tonight, I stand before you to share the incredible results.”

PELOSI: Yes, there you stand – impeached, a permanent stain on history and a boil to be lanced on the rump of my party.

TRUMP: “The years of economic decay are over. The days of our country being used, taken advantage of, and even scorned by other nations are long behind us. Gone too are the broken promises, jobless recoveries, tired platitudes, and constant excuses for the depletion of American wealth, power, and prestige.”

PELOSI:  You moron, other nations didn’t scorn us and take advantage, bur rather treated us like a beloved parent or grandparent that they could go to for emotional support, hugs and an allowance.  I thought you guys stood for family values, you orange-headed dork!

TRUMP: “In just 3 short years, we have shattered the mentality of American decline, and we have rejected the downsizing of America’s destiny. We are moving forward at a pace that was unimaginable just a short time ago, and we are never going back!” 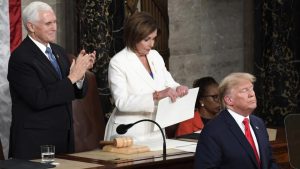 PELOSI: America wasn’t declining or downsizing before you got here, you doofus.  Our party reminded voters repeatedly two percent growth was the new normal and they should adapt their expectations to align with Democrat presidents. American voters aren’t idiots!

TRUMP: “From the pilgrims to our Founders, from the soldiers at Valley Forge to the marchers at Selma, and from President Lincoln to the Reverend Dr. Martin Luther King, Jr., Americans have always rejected limits on our children’s future.”

PELOSI: We reject limits on children’s futures too!  We’re the ones they go to for help with free birth control options, free lunches and free college. Not to mention free conversion therapy on gender confusion issues.  And that’s not even mentioning the drag queens we provide to younger children for story hour – for FREE – you red-tied baboon!

TRUMP: “Over 130 legislators in this chamber have endorsed legislation that would bankrupt our Nation by providing free taxpayer-funded healthcare to millions of illegal aliens, forcing taxpayers to subsidize free care for anyone in the world who unlawfully crosses our borders.” 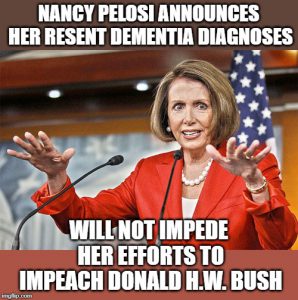 TRUMP: “Whether we are Republican, Democrat, or Independent, surely we must all agree that every human life is a sacred gift from God!”

PELOSI: I know that, President Ding-Dong.   I am a good Catholic, after all.  As long as a birthing mother wants their baby through pregnancy and a week or so after birth, and her doctor agrees, we agree that all human life is sacred.  As for being a gift from God, you do know where babies come from, right?

TRUMP: “The State of California passed an outrageous law declaring their whole State to be a sanctuary for criminal illegal immigrants — with catastrophic results.

“Here is just one tragic example. In December 2018, California police detained an illegal alien with five prior arrests, including convictions for robbery and assault. But as required by California’s Sanctuary Law, local authorities released him.  Days later, the criminal alien went on a gruesome spree of deadly violence.”

PELOSI: How dare you question the motives of California’s public servants!  I’ll put California’s economy, schools, and justice system above you any day, Mr. Impeached -for-Life.  And before you say anything about our little, uh, brownout issue, California offers free organic Birkenstocks to any resident strolling our downtown streets and sidewalks.

Note to the Speaker of the House:  Thanks for praying for our president.  You really must be a good Catholic because your prayers are working wonders!