Hollywood celebs and others infected with acute Trump Derangement Syndrome (TDS) were quick to blame the president for Hawaii’s well publicized false missile attack alarm because…well, the Diss Trump show must go on and that’s what they do.

I mean, who doesn’t appreciate getting unsolicited opinions from people paid to be anyone other than themselves.

Comedian Jim Carrey: “If we allow this one-man Gomorrah and his corrupt Republican congress to continue alienating the world we are headed for suffering beyond all imagination.”

Actress Jamie Lee Curtis: “This Hawaii missle (sic) scare is on YOU Mr. Trump. The real FEAR that mothers & fathers & children felt is on YOU. It is on YOUR ARROGANCE. HUBRIS. NARCISSISM. RAGE. EGO. IMMATURITY and your UNSTABLE IDIOCY. Shame on your hate filled self. YOU DID THIS!”

Judd Apatow: (Big time Hollywood producer whose name I had to Google): Great to know the button saying there is a nuclear war is right next to the one saying this is a test. This is a load of bulls#!%. This is not what happened. Keep digging. This isn’t about a fu#@^!* shift change. ”

Amazing that both Hillary and Obama were never held accountable for things like Benghazi (where people actually died), Hillary’s illegal email server (where identities of intelligence officials were hacked and some sources were killed) and where the personal online health and financial information of millions of federal employees and military personnel were compromised and the left said, “Meh.”

What happened in Hawaii last Saturday was scary, but it was a regrettable accident caused by a state employee and had as much to do with the presidency as the rise of the oceans slowing and our planet healing – or being nominated for a Nobel Peace Prize just 11 days into office.

Maybe the employee with the itchy trigger finger can file for leniency with the Hawaii governor to have his record expunged so they can still win Employee of the Year.

Monday was also Martin Luther King, Jr Day and what better way to honor the legacy of the civil rights icon than to have an “empty barrel” like Maxine Walters replay the overdrawn race card.

“Dr. Martin Luther King Jr. would have encouraged every responsible human being to march for justice, to march for peace, and most of all, to march for the impeachment of Donald Trump,” she tweeted. Similar messages were expressed by Georgia’s U.S. Representative John Lewis and Florida congresswoman Frederica “Mad Hatter” Wilson.

On a lighter note, January 15th also marked the 126th anniversary since Dr. James Naismith published the rules of basketball. Naismith invented the game in Springfield, Massachusetts in 1892. As we like to say in Indiana, basketball was invented in Massachusetts but perfected in Indiana.

The media’s latest flavor-of-the-month, fake news charge against Trump is that he is mentally unfit. After witnessing some of the questions media members posed at today’s press conference, many Americans could question the media’s mental health – especially Jim Acosta, Joe Scarborough, etc.

Here’s a sample of some of the questions posted to White House physician, Rear Admiral Dr. Ronnie Jackson.

“Are you ruling out things like early onset Alzheimer’s? Are you looking at dementia-like symptoms?”

“There was an incident recently where the President appeared to slur his words while giving an address.  Did you look into what the cause of that might have been at all?”

” Because of his age, will you conduct cognitive testing in the future?”

“Do believe he is fit for duty? How can you determine that?”

And then some members of the Fourth Estate chose to play doctor themselves:

“He (the president) is taking a cholesterol-lowering medication, he has evidence of heart disease, and he’s borderline obese.  Can you characterize that as excellent health?”

“Can you explain to me how a guy who eats McDonald’s and (inaudible) and all those diet cokes and who never exercises, is in as good as shape as you say he’s in?”

“Do you keep a tally of how much golf the U.S. President plays?  And do you consider that exercise?”

“Is there anyone on the President’s medical team, such as a psychiatrist or psychologist, whose job it is to monitor the President’s emotional state or watch for potential psychiatric problems or indicators of those?”

“On what basis would you — and this is just a philosophical question — advise the Cabinet that the President is unable to discharge his duties?  How does that bar get met?”

After failing to trip up the good doctor with their clever inquiries, the questions then devolved from the insulting to the insane:

“Is he limited to one scoop of ice cream now?”

“Does the President wear dentures?”

“Do you have any concerns about the President’s use of Twitter?”

“How would you describe his diet before he became President?”

Are you confident of his prostate health?”

And the media think Trump is a sexist. You can bet Oprah Winfrey would never be asked questions about her diet and prostate health if she was ever president!

At 8 o’clock this night President Trump announced the winners of The Fake News Awards in a flourish that would have made P.T. Barnum proud. Unless you share cave space with the Taliban, everyone who watches even a smidgen of TV knows that coverage of President Trump’s first year in office has bordered between negative to outright hostile.

Trump being Trump, he decided to honor the 90% negative media coverage he received in 2017 with their own awards. The president’s flair for the dramatic didn’t disappoint after the link to the award winners he shared on his Twitter account crashed the web server displaying the results.

To the surprise of no one CNN won four of the 11 awards and the New York Times two.  Individual winners included the New York Times’ Paul Krugman, ABC’s Brian Ross and The Washington Post’s Dave Weigel earning a special mention for misrepresenting the size of a Trump crowd in Pensacola, Florida in a tweet.

Ahead of the much anticipated announcement, retiring junior Arizona senator Jeff Flake and senior Arizona senator John McCain shared a hissy fit about the president’s poking fun at the media. McCain said that Trump’s use of the phrase, “fake news” is “being used by autocrats to silence reporters, undermine political opponents, stave off media scrutiny, and mislead citizens.”

Senator Flake, whose poll numbers only rise to double digits in his own household, compared the President to Joseph Stalin. “2018 must be the year in which the truth takes a stand against power that would weaken it,” Flake said before an empty Senate chamber.  He also criticized the president for calling the media “the enemy of the people.”

Maybe next Trump will announce awards for self-serving U.S. senators.  He can call them the Flake the Fake Senator Awards.

On Thursday the House Intelligence Committee passed a motion along party lines to make a classified intelligence report charging excessive abuse of the Foreign Intelligence Surveillance Act (FISA) available to all congressional members.

Those that read the four-page report described it in the following ways: “Deeply troubling.” “Alarming.”  “Shocking.” “Bombshell.” “Jaw dropping.”

No wonder the Democrats were considering shutting down the federal government this weekend. How bad are the contents of the four-page report for Democrats and Obama administration officials?

“I think that this will not end just with firings. I believe there are people who will go to jail,” Florida Republican Representative Matt Gaetz said.

Several sources told investigative journalist Sara Carter they wouldn’t be surprised if it leads to the end of the Mueller investigation. 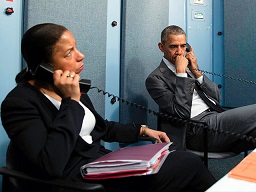 Florida Republican Representative Ron DeSantis tweeted this after reviewing the document: “The classified report compiled by House Intelligence is deeply troubling and raises serious questions about the upper echelon of the Obama DOJ and Comey FBI as it relates to the so-called collusion investigation.”

Pennsylvania Rep. Scott Perry told Fox News, “You think about, ‘is this happening in America or is this the KGB?’ That’s how alarming it is.”

North Carolina Republican Representative and Freedom Caucus Chairman Mark Meadows was even more somber. “It is shocking. Part of me wishes that I didn’t read it because I don’t want to believe that those kinds of things could be happening in this country that I call home and love so much.”

Democrats voted as a bloc against releasing the document outside the intelligence committee and you can bet they definitely will oppose releasing it to the general public. The only known Democrat to comment was California’s Adam Schiff who called the report “misleading” and “rife with factual inaccuracies.”

“This may help carry White House water, but it is a deep disservice to our law enforcement professionals,” he opined.

The Gospel of John (8:32) says, “The truth will set you free.”  Those DOJ and FBI officials colluding directly with Obama administration officials, Fusion GPS and the Clinton campaign to influence the 2016 presidential election, and indirectly with Russian Kremlin intelligence, may prove to be the exception to that rule.

Democrats didn’t object to anything in the proposed budget bill. It was what “wasn’t” in the bill that prompted the Dems to throw a tantrum: DACA, DACA, DACA. How can Republicans be blamed if the Democrats had no objections to the budget bill?

But what if there was another reason why Dems took the controversial move to shut down the government and paychecks for the American military and federal workforce in support of hundreds of thousands of illegals. What if they are trying to distract from the mushrooming FISA controversy that gathered considerable momentum on Thursday.

Monopolizing media coverage by closing the government would also distract from the anniversary date on Saturday marking Trump’s first successful year in office and all the good he has accomplished.

In short, the only way the Dems thought they could slow the Trump train was by making the case to American voters that on top of all the other inconveniences, senseless crime and expensive social welfare programs they believe taxpayers owe those here illegally, we also have to close our government on the altar of political correctness. Brilliant, huh?

It was a rash move by an increasingly desperate party bereft of constructive ideas, dynamic leadership and one about to be implicated in the most heinous political scandal in U.S. history.