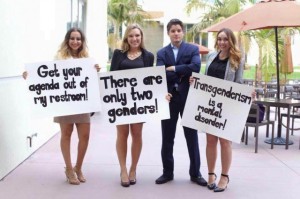 Until Obama the thought of a man walking into a women’s restroom for the purpose of answering nature’s call was considered indecent if not illegal. Today, gender dysphoria is considered chic.

All this talk about who can and can’t use the women’s restroom is like society has flushed commonsense and propriety down the cultural commode.

Gender dysphoria is the latest cause célèbre among those that believe gender is a selective option – like choosing factory installed equipment on a Toyota Prius.

Confusing gender dysphoria and gender dyslexia is understandable.  Both are mental disorders characterized by an inability to recognize words or in the case of the latter, biological gender.

Sounds innocuous enough – until you realize the Charlotte law designed to “protect” the .003 percent of the population that was transgender also allowed men in government buildings to shower and urinate in the same room as little girls and grandmothers.  Bye-bye, privy privacy.

Prior to Charlotte city officials starting the transgender toilet tirade, the use of public restrooms was simple.  There were two rooms designated “men” and “women” – period. That arrangement had worked just fine since the outhouse came inside.

Other than women’s “commodious” restrooms having longer lines to use them, better mirrors and I suspect better feng shui, all was well in toilet water world.

Enter the LGBT community. Suddenly the conventional wisdom espoused in Genesis 1:27 was viewed as hate speech and discriminatory. “So God created mankind in his own image, in the image of God he created them; male and female he created them.”

This being the age of safe spaces and microagressions, archaic concepts like “God” and traditional standards of bathroom decorum are now deemed intolerant. Today gender fluidity reigns supreme and one’s gender is viewed as interchangeable as toilet paper and urinal cake.

You know you have a septic issue when musicians cancel concerts, corporations scrap expansion plans, and sports leagues take away all-star and playoff games – all to accommodate an issue that was a non-issue before the LGBT community took the plunger and rammed bathroom choice down society’s pipes.

When a federal appeals court ruled that biological gender was moot when it comes to school restrooms, even President Obama sashayed into the national potty conversation before leaving office to return to his roots of disorganizing communities. But not before his Education and Justice Departments warned schools that failure to permit transgender-identifying students access to the bathrooms, locker rooms and showers of their choice could jeopardize national funding.

Here’s an idea I believe could unplug the whole transgender potty issue: why not locate public restrooms for cross-dressing grownups playing dress up in campus safe zones or sanctuary cities? That way the gender-challenged can pee “unimpeded.”

Even better, no one will have to explain to their kids why the grown man in a low-cut dress is standing at the urinal.